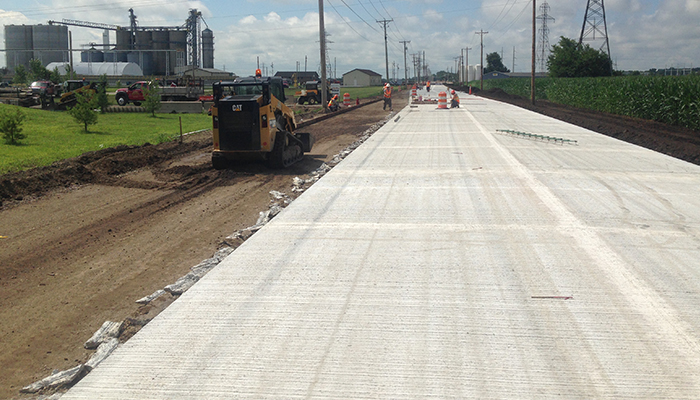 “The addition of the concrete improvements and widening along Walnut Road, as part of the larger New Carlisle Development Area – Sanitary and Water Improvements Project, is the culminating result of an owner, contractor and engineer all being on the same page, with the same goal in mind. Everyone’s devoted attention and timely effort and responses to the issues at hand resulted in a win-win-win for all involved,” said Jeremey Roschyk, Donohue Project Manager and South Bend Area Manager.

When the project was initially designed and bid, no concrete work was slated. Following bidding, the power utility unexpectedly constructed a set of new utility poles and overhead lines in the path of the planned sanitary sewer; as a result, the new sanitary sewer had to be relocated further into Walnut Road. The County decided that it would also be an appropriate time to reconstruct and widen the existing asphalt roadway with concrete. Donohue identified multiple solutions and consulted with the County on the optimal alternative. Within a month, the selected improvements to Walnut Road were designed by Donohue and the associated cost was negotiated with the contractor.

“When the County designed and bid the water and sewer project done in partnership with the St. Joseph Energy Center (SJEC), we had not anticipated doing a complete reconstruction of this section of roadway. After much discussion internally, some strong redesign by Donohue & Associates, a lot of patience by Gavilon Grain, SJEC and other businesses, and great concrete work by Selge Construction and their partners, we have a quality section of roadway that will meet the industrial needs of the corridor well into the future. This section will become the typical section for roadways in the industrial area in the future,” remarked Bill Schalliol, Executive Director of Economic Development for St. Joseph County.