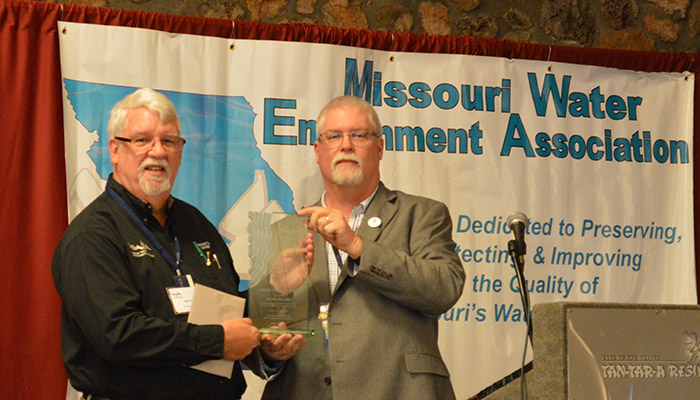 Donohue’s Al Callier, PE was a recipient of the “Golden Fleece” award from the Missouri Water Environment Association (MWEA) during their recent annual meeting. This award was established in 2003, and is named in honor of its two initial awardees, Bob Flick and John Reece. In Greek mythology, the Golden Fleece was considered the ultimate treasure. For the MWEA, this award is considered the ultimate honor.

Upon receiving the award, Al remarked, “Being a member of MWEA and WEF has been an honor and privilege. I am deeply gratified by being part of MWEA and I’m grateful for this award. I look forward to continuing my work with the association and all of the friends I have made in the profession over the years.”

This is not an annual award as it has been given to only five people in total, including Al Callier and Ken Gambaro this year. Nomination must be by a member of the executive board, and a 2/3 vote of the full board is required for approval. The criteria for the award includes active participation throughout membership, involvement in numerous leadership roles, service beyond what is normal or typically expected, mentor to younger leaders and members, member 20+ years, long and meritorious service, and dedication to the profession.

Since Al became an MWEA member in 1973, he has been involved in and has chaired numerous committees: Safety, Local Arrangements, Constitution & Bylaws, Standing Committee Structure Study, Newsletter, Nominating, and Awards. In 1991 he served as President. From 1996 to 1999 he was a Water Environment Federation (WEF) Delegate for MWEA. He has also been active in a variety of WEF committees. Al is a recipient of the WEF’s Bedell (1991) and Hatfield (1986) awards.